Hello! Long time to blog!  Hope everyone enjoyed their holidays as much I did. Family and friends are the best to hang out with during that time of year for sure.

Updates.  There is a lot. I've been using as a lot of you know my author page on Facebook for any updates I have as well as i'm in the Romantic Tales: Bedtime Stories at times too.

Thanks so much for great response for Season 3 and Volume 1..btw, let me post the pic of Volume One: paperback version is available at amazon.com and also B&N.com 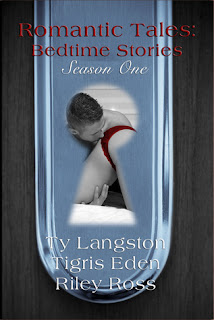 We will have a Second Season on Romantic Tales that will be released in March and from myself, this season will feature the long-awaited sequel to 'Decadent Dreams',  entitled 'Mail Order Groom'.

Not to worry about the CRAVE series, I'm at work on NEED, the second story as well as HUNGER.
They'll be some spin-off of other characters as well as also mini-stories that are called 'Craving A Bite" the 1st of which is actually up at both the Romantic Tales Street Team called Story Weavers as well as  my Street Team group called CRAVERS on FB. anyone that would like an invite just message me via FB and we'll give you an invite.

Street Team members, not only get exclusive access to  new stories, contests, ARC's and giveaways! The group has grown a lot and we've been having a lot of fun!

I also have some other stories that i've been working on (can't share quite yet! I hope to let everyone know by summer) and also a really cool project with Riley Ross and a fantastic project with Tigris Eden that she and I have been dying to do forever that people if they knew us, wouldn't think it was us...(i'll just leave it at that).

Ok, i have to go....But also i'll be doing a mini-site for the CRAVE guys and i think that'll be another time for a giveaway!!! Be Good!!!