Okay, i've been keeping this shiny for a few days now, but since the release date is coming up, I wanted to give you a glimpse of my upcoming release in a special, ongoing collaboration called Romantic Tales: Bedtime Stories. 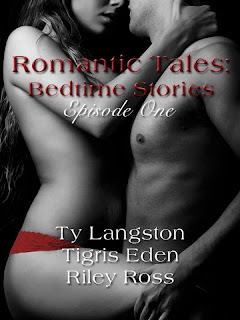 Romantic Tales: Bedtime Stories features myself, Tigris Eden and Riley Ross spinning serialized tales once a month via ebook. aka as episodes.

The Release date is this upcoming Saturday, Sept 1st exclusively on amazon.com
There are fantasy stories, paranormal romance and contemporary.

Here's a synopsis and blurb about each story...And also please go to this link: where we'll be posting previews of next month's episodes throughout the month!

Thanks so much for your support!!

As a reporter for the Wakefield Post, Harper Erkstine has seen everything. From murders to robberies, , all of her recent stories have ended with tragic consequences so great, that she began to question if she made the right career choice for herself.
While all of her friends were dating, or going to clubs, she was winning journalism awards for covering the latest drive-by shooting or a home invasion that cost someone she knew, their lives.
She loved her job, it was rewarding to be a crime solver and get to the truth of the matter. As much as she loved her job, but the hours of a Metro beat reporter began to descend her into burn out mode.
She craved balance. A break, a welcome distraction every now and then. She forgot what it was like to have fun, to take a breath, smell the roses.
Was it wrong to want a great career and to have some kind of a personal life? She couldn’t remember the last time she had a date or danced with someone from the opposite sex.
In the middle of working on a missing person’s story that has rocked her town to the core, Harper decides as a favor to her friend and colleague to do a feature on local an up and coming rock band, called ‘Crave.’
It was a break from her routine, but Harper soon discovers that this band may have ties to the missing person, not only does she question why, but she also finds there is more to this band than just their music.

Old earth has been deemed unsuitable for life, New Earth is home. With the Uni-War over, races have joined together in order to sustain their way of life. All life was deemed worth saving, but only one race failed to submit. Humans.

Now extinct, humans are a thing of the past, or at least their way of life. The people of New Earth won’t acknowledge their hand in the human’s eradication, but they have benefited from it. Dr. Vaggo Blackmore has found the answer, he’s restored his races way of life- sustenance through farming. The one thing that will give them back their long lives….. Blood: human blood.

Biologically engineered in a lab, Genesis Blackmore has always been different. Her father has told her it’s due to her enhancements, the Federated Council sees her as a genetic mutation; and her fellow peers see her as the shiny new toy. Gen has had better days.

Everyone on New Earth has milky white skin, platinum blonde hair, and electric blue eyes. It’s the norm. Genesis’ glossy, black hair, ice blue eyes ringed by gold, would have almost made her socially acceptable- if it wasn’t for her honey, almond skin and blue, gold veins. In a sea of milky white she alone is the dark anomaly.

All Pars get their life’s nourishment through blood plasma. All Pars find their match through the tasting. Gen can do neither, forbidden by her father to do so. She can neither taste, nor be tasted. Something that’s never bothered her until now.

The Getaway isn’t your typical romance woman meets man of her dreams, loses him and then they get their happily ever after. It’s a romance story with hints of drama and plenty of comedy. Mike and Juliet have been dating for about four months. Juliet is madly in love with him but has never shared her feelings.

Mike hasn’t said those three magical words so she doesn’t even know if they are on the same page when it comes to their relationship. Mike takes Juliet on a two week vacation, so she can escape her family drama and stresses from her job. He has romantic surprises planned and there are several unexpected surprises for them both. How well do Mike and Juliet really know each other especially when an explosive secret from his past is revealed? Will their relationship survive a visit from his family and his ex-girlfriend? Will the secret destroy them or make them stronger as a couple? His mother has made it clear to everyone that she wants Mike back with his vile ex-girlfriend?

Will his mother sabotage her son’s relationship with Juliet? Juliet does have an ally in Mike’s father. Will Juliet fight for her love? Or will she let him go without exposing his mother for her dastardly schemes? How far will his mom go to ensure she gets what she wants for her son?